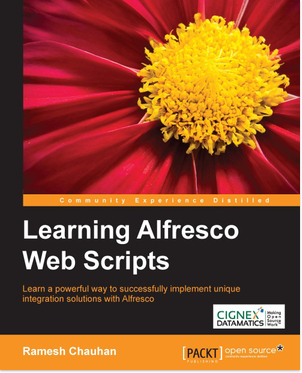 Its been a while since I read a new Alfresco technical book.  I was slightly skeptical that this book would cover something new that I havent learned from other books that I have read.  I was especially concerned since this book is much smaller than other Alfresco books I have reviewed (30-50% smaller).

A quick read – YES, but does it cover enough about the topic to be of any value?

Ramesh Chauhan‘s writing style is very conversational – similar to a teacher speaking to a student.  This took me some time to get used to, but eventually, I stopped noticing it and the content spoke to me.

I got the most value out of the book from Chapters 3 & 6.  the author created several diagrams that showed the execution flow of web script.  This was very helpful for me, since I am picture person.  Then in Chapter 6, Ramesh presents an example of web script that a developer might want to build.  He starts with requirements, goes into how to design it, and them discusses the details about the actual coding. He also describes various test cases that one should take into account when building a web script.  This is something that very few writers even think to write about.

There are other chapters talking about deploying/troubleshooting web scripts, mavening web scripts and extending web script framework.  Nothing really thought-provoking nor interesting.

In summary,  I think the author had a good goal in writing this book; however, the execution left a lot to be desired.  I really liked Chapter 6 and I wished Ramesh spent more effort creating/explaining more examples.